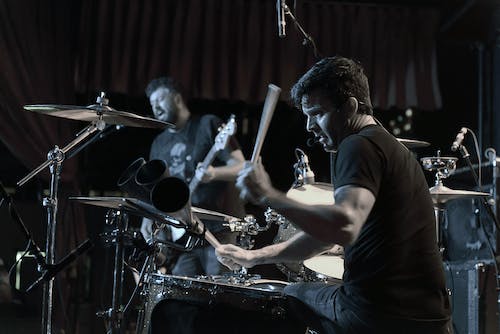 Big Business started as a two piece band composed of Jared Warren of Karp and The Tight Bros From Way Back When, and Coady Willis of Murder City Devils. Their sound has been characterized as a bombastic and frantic low end attack, marked by Warren's signature vocal delivery. The band released its first album, "Head for the Shallow", on January 25, 2005.

In late 2006, after relocating to Los Angeles, Jared and Coady both became members of The Melvins, first appearing on "(A) Senile Animal". The tour, titled "the Double-Drumming Rock for Peace tour", featured Warren and Willis playing a set as Big Business before being joined by Crover and Osborne for a set as the Melvins. While on tour, Big Business played with David Scott Stone who would later play guitar and Minimoog Voyager on all songs from their 2007 release "Here Come the Waterworks".

After releasing Here Come the Waterworks to critical acclaim, Big Business was given an opening spot on the summer leg of the Tool tour. Toshi Kasai played guitar for Big Business throughout this tour.

After the fall US tour ended, Big Business started recording material for the new Melvins album, entitled "Nude With Boots", which was released on July 8, 2008.

On March 9, 2008 Toshi Kasai was introduced onstage as the third member of Big Business. Both the band and Toshi verified this on their respective Myspace pages. Big Business released their third album "Mind the Drift" on May 12, 2009. The album, produced by Phil Ek, who has produced both of their previous albums.[1] was given a "pre-release" preview at the website http://mindthedrift.com/

In October, 2010 after a year of not playing shows, they posted on their myspace that they had added another guitarist Scott Martin (400 Blows, Crom), officially making them a "Power Quartet".

Jon Weisnewski and Nat Damm have been playing together for over a decade, and Jesse Roberts is a seamless addition. The songs ebb from beer raising, vocal-peppered riffs to hair growing, sludge ridden blasts. Guitar driven vocal hooks steer you into a bass and drum-accentuated stupor. All you love about hardcore, metal and good old fashioned fun is harnessed and manipulated into a brutally drawn out and rolling release that is refreshing and familiar. - Total Fest Blog