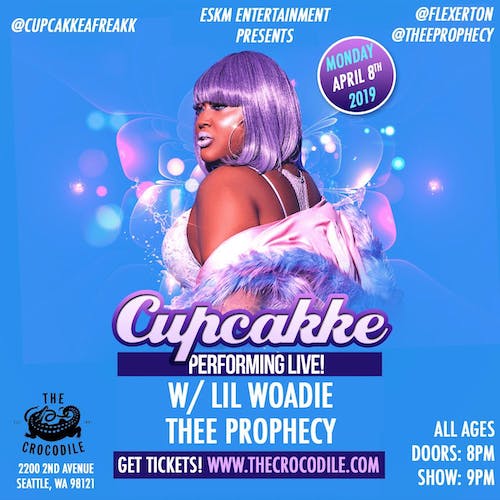 Bold and outspoken Chicago rapper CupcakKe achieved viral success and critical acclaim with her brazen, unapologetically explicit songs and videos that channeled the likes of Lil Kim, Foxy Brown, and Gangsta Boo. Her work explores sexuality in graphic detail, and while many of her songs are humorous and playful, she has more serious, introspective material that deals with sexual abuse ("Pedophile"), racial issues ("Picking Cotton"), and LGBTQ empowerment ("Crayons"). She debuted in 2016 with a pair of raunchy EPs and a full-length, Audacious, following with the critically-acclaimed Queen Elizabitch (2017) and Ephorize (2018).

Elizabeth Eden Harris was born in Chicago in 1997. At the age of 14, she began writing religious-themed poetry, performing in local churches. She started turning her poems into raps and uploading them to YouTube, receiving thousands of views. In late 2015, inspired by Khia's hit "My Neck, My Back," she decided to write sexually explicit material. The videos "Vagina" and "Deepthroat" appeared and quickly spread on the Internet like wildfire. Both songs appeared on her debut mixtape, Cum Cake, in February of 2016. S.T.D (Shelters to Deltas), named for Harris' years spent in homeless shelters, followed in June, and the studio album Audacious arrived in October. The releases received praise from Pitchfork, Rolling Stone, MTV News, and numerous hip-hop websites. Harris guested on Charli XCX's song "Lipgloss," which appeared on her March 2017 mixtape, Number 1 Angel. CupcakKe's second studio album, Queen Elizabitch, appeared soon after, and the rapper toured North America twice during the year, in addition to releasing two subsequent singles, "Exit" and "Cartoons." Both songs appeared on her third studio album, Ephorize, which dropped near the beginning of 2018. The set peaked at number two on the Heatseekers chart, while landing in the Top 20 of the Billboard Independent Albums chart. ~ Paul SimpsonFrom great tragedy comes great art. Or, at least, that’s the hope. In creating their new albums, Jude Vol. I and Jude Vol. II, The Bright Light Social Hour found making music to be a healing, cathartic process after the band was deeply shaken by grief.

In 2015, around the release of the Austin group’s second album Space Is Still The Place, Jackie’s brother Alex, the band’s manager of four years, was deep in the delusional throes of severe and sudden bipolar 1 disorder. It was a time of immense stress and intensity for the musicians, who began writing songs for a new album in their home studio on Lake Travis as Alex spiraled. The songs took a turn when Alex took his own life on the shore of the lake, witnessed in its aftermath by Jackie.

“It was a terrible thing, but it was also the most beautiful thing I’ve ever experienced and probably will ever experience,” Jackie says. “This was all happening as we started the record. Not all the songs are about Alex, but I think even the ones that aren’t all have a bittersweet mix of overwhelming beauty and terrible loss. The music deals with the ripples it caused in all of our lives, especially in our relationships, with an underlying theme of trying to wrap our heads around all of this.”

The contiguous albums, titled after Alex’s middle name, are about what it means to lose someone and then be left to pick up the pieces. They’re about relationships and politics and confronting your own emotions head on. Because of these intense thematic cores, the musicians searched for a more streamlined way to express themselves in song. Where Space Is Still The Place is cloudy and filled with distortion, Jude Vol. I and Jude Vol. II seek clarity and clean, bold lines amidst the haze. There are elements of shoegaze, drawn from bands like My Bloody Valentine and Slowdive, as well as Krautrock and New Wave, resulting in dreamy textures with distinct articulations of emotion right beneath the surface.

In November of 2017, the band drove to Los Angeles, armed with 18 songs that confronted their feelings of grief and loss, and spent several months recording in Sunset Sound with producer Chris Coady (Beach House, Slowdive, Yeah Yeah Yeahs). There they narrowed the tracks down to 14 and found inspiration in the historic studio. “Being in such an iconic space really made us rise to the occasion,” Jackie notes. “It felt like we had to make something that might be smiled upon by all the spirits of the amazing artists like Prince and The Doors who have recorded there over the years.”

“It was the smoothest recording process I think we’ve ever had,” Curtis adds. “It’s not usually particularly fractious, but we’ve done a lot of our past recordings ourselves and we’re constantly second guessing ourselves and our work. Having Chris as a producer and an engineer and helping us guide the project really enhanced the teamwork aspect of making the record. We really trusted and leaned on each other, but also allowed everyone a lot of space to do our things. It felt like all four of us were really dialed in to the band and trying to push ourselves in new ways.”

The session yielded two separate albums, each with seven tracks. The first volume faces the immediate violence of Alex’s death and attempts to understand the resulting emotions, while the second volume accepts and appreciates the beauty of it all, eventually finding gratitude. The final two songs on Jude Vol. I are the center-point of everything, beginning with the melancholy haze of “My Boy” and flowing into the buoyant shimmer of “Swimming Out.”

“’My Boy’ details waking up every day and trying to deal with the idea that this person is no longer here,” Jackie explains. “We relied on him so much for guidance and now we’re trying to carry on without his guidance. ‘Swimming Out’ is an answer to that, imaging Alex in the afterlife. He had no problem holding back his thoughts, especially when he saw something that wasn’t right, so it’s this idea of him being in this peaceful afterlife and having suggestions for how it could be better.”

The rest of the songs on Jude Vol. I, which follows the band’s recent EP Missing Something, take on related, but less direct responses to Alex’s death. “She Wanna Love You,” which layers vibrant synthesizers over each other, confronts the challenges of submitting to a partner’s love (“If you can just accept it, then it will set you free,” Jackie notes), while “Lie To Me” examines the ease of accepting outrageous lies told by the powers that be. It was the latter that really set the aesthetic tone for the rest of the album. “It has these very clean and modern lines,” Curtis says. “There’s less work to do to go in and find the emotions. This song really set a good precedent for developing the rest of the songs.”

For The Bright Light Social Hour, who have evolved significantly since they started as an art rock collective in college in 2004, these songs bring clarity to the chaos of emotions that can come after a loss or a heartbreak or a tragedy. The band, who have toured extensively, including festival stops at Austin City Limits and Lollapalooza, found a way out of their grief in the years that followed Alex’s death by focusing on the music. Listening to the heartfelt, evocative songs on Jude Vol. I and Jude Vol. II may be able to do the same for those who hear them.

“I hope that this album can help untangle these feelings of grief for others,” Jackie says. “You can have feelings of fear and great relief and despair and anger all mixed in. These songs hopefully encapsulate that plethora of emotions in facing death head on, which is something that’s so intense and painful. But when you go through it, you learn that without death there is no life. In the end, it’s not a scary thing we should be afraid of.”