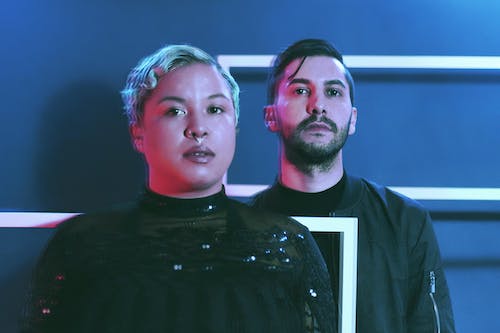 This show is SOLD OUT!! We have partnered with Lyte, so fans that weren’t able to grab tickets can join our official secure waitlist. If tickets become available, then those fans will be able to buy an authentic ticket to the show!

Chicago-based duo of Na’el Shehade and Via Rosa conjure up an alluring brew of R&B and dance music. Both members carry considerable musical backgrounds individually as well contrasting origins. Born in Austin and eventually raised in California, Via’s parents were hippies that played in a reggae band. At 14 she began making music on her own. She eventually moved to Chicago in 2010 and released her debut the DeathViaLove EP on Soundcloud in 2014. Chicago-born Na’el came from a conservative immigrant family. He started DJ’ing parties before he even reached his teenage years. He began making music at the age of 13 and started producing and engineering professionally in college. He went on to contribute to Chance the Rapper's Acid Rap, along with engineering for Kanye West's remix of Chief Keef's colossal "Don't Like."

The duo eventually came to meet through their mutual friend Jean Deaux. They decided to go into the studio and collaborate on music with no rules. Just two musicians allowing each other to be free to express themselves. The stark differences in their backgrounds lent to them creating something truly unique and engaging. Soon after DRAMA was born.

They self-released their debut EP Gallows in 2016 followed by Lies After Love in 2018 and their latest single “Dead and Gone” in 2019. They've toured extensively and have remained independent which has given them the freedom to continue to push musical boundaries.