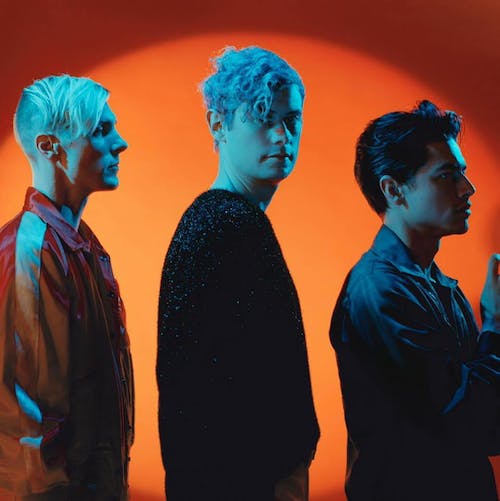 First, DREAMERS’ aesthetic embodies psychedelia. It hearkens back to simpler times on the internet, when pixilated 8-bit imagery of starry nights looked like HD. The group flaunts its self-made exploding rainbow gifs like a unicorn in heat.

Second, contrary to what these psychedelic visions may musically imply, DREAMERS plays smart pop. The 12 tracks on the trio’s debut LP This Album Does Not Exist sizzle and spark with three-minute tunes to perk you up and make you shake.

Third, according to DREAMERS, there’s a point to this.

When DREAMERS—Nick Wold (vocals/guitar), Nelson (bass/vocals), and Jacob Wick (drums)—talk about This Album Does Not Exist, they assume a collective tone of considerate existentialism. They seek to counter the crassness of pop, the snobbery of jazz, and the pretention of indie that zaps the fun out of music with meaning. Yet, they want to draw you in, indiscriminate of taste, style, or ideology.

“Nothing exists by itself,” muses Wold. “Everything in your mind is created in your mind and you see the world through that lens. Everything has a subjective reality in addition to an objective one, especially with music and art. So on this record, we’re toying with that idea of existence and nonexistence.”

Yet, these songs of playfulness come from a place of less—homelessness, joblessness, borderline hopelessness. In 2014, Wold simultaneously vacated a relationship and an apartment and began living in his Brooklyn practice space. The brick warehouse used to be a brewery, he recalls, with rats as ubiquitous as the graffiti crawling the walls.

“It was just a cinderblock room with no windows, no bathrooms, ” begins Wold before Nelson chimes in, “Musical prison!”

Recalls Wold, “I showered with this $20 a month gym membership I had.” When he returned to the studio, “I just tried to make it look like I was coming in for a night session.”

During the two years of living in this “musical prison,” Wold reduced his bartending gig to just once per week. It freed up his schedule to write more than 100 songs, many of which ended up on This Album Does Not Exist.

Meanwhile, both Nelson and Wick bottomed out on the musician lifestyle and returned to office jobs in New York and Los Angeles, respectively. As Nelson says, “We found ourselves in ‘normal’ situations and quickly decided to yank ourselves out of it.”

So now, after bouts of vagrancy, nomadism, and vigilant attempts at normalcy, DREAMERS is now committed to its collective vision of artistry, inclusion, and idealism.

“The role of the artist in society is to be the dreamer, the one who thinks ahead,” considers Wold.

“We’re trying to pull people in. It’s a way of trying to coax people into our world, continues Nelson. “We want to bring people in to listen to our music and enjoy themselves....and then hopefully it’ll lead to a deeper connection.”

That’s the dreamer MO, after all—to find the joy in living and to chase it.

After more than two years of nomadism and cross-country touring, as well as two EPs, Los Angeles’ DREAMERS released its debut full-length LP This Album Does Not Exist on August 26, 2016. The smart alt pop trio, comprised of Nick Wold (vocals/guitar), Nelson (bass/vocals), and Jacob Wick (drums), wrote much for the album in Brooklyn before moving to L.A. and tracking at Fairfax Recordings (formerly Sound City Studios). Led by singles like “Drugs” and “Sweet Disaster,” DREAMERS pits the party and the paranoia of escapism in seemingly effortlessly tight, three-minute tunes. Album tracks like “Pain Killer” and “Lucky Dog” follow in this vein, swinging with handclaps and driving with sing-along choruses. Throughout This Album Does Not Exist, DREAMERS toys with themes of existence and existentialism, but it’s easy enough to get sucked into their world and dance the big questions away.