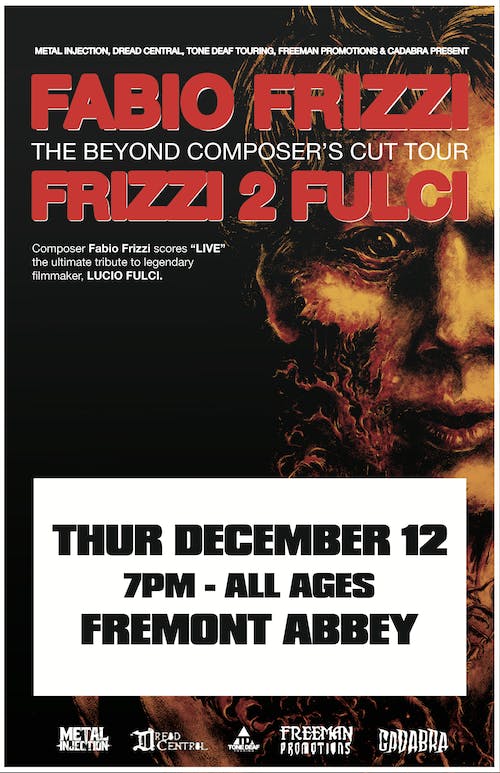 "Italian composer Fabio Frizzi is best known for his eerie scores for European horror movies. A frequent collaborator with Italian horror icon Lucio Fulci from the '70s into the '90s on films such as Contraband, The Beyond, and A Cat in the Brain, his music often used analog synthesizers, with their fuzzy sound adding a layer of creepiness to his downbeat melodies. Still incorporating elements of electronic, classical, and rock music into his scores with help from vintage instruments, Frizzi went on to compose music for projects including TV's Il Capitano (2005), House of Forbidden Secrets (2013), and Puppet Master: The Littlest Reich (2018).

Fabio Frizzi was born in Bologna, Emilia-Romagna, Italy on July 2, 1951. As a teenager, he was passionate about both movies and music, and he formed a trio with fellow musicians Franco Bixio and Vince Tempera to write and perform music for movies and TV. In 1968, Frizzi and his partners scored a spaghetti Western, Ed ora... raccomanda l'anima a Dio! (aka And Now, Make Your Peace with God), and by the mid-'70s he was scoring several pictures a year. In 1975, Frizzi was hired to write music for I quattro dell'apocalisse (aka Four of the Apocalypse), a Western directed by journeyman director Lucio Fulci. Four years later, when Fulci was asked to direct a horror film inspired by George A. Romero's Dawn of the Dead, he brought Frizzi in to score the picture.

The movie, Zombie (aka Zombi 2), was an international success, and as Fulci's name became synonymous with gory Italian horror, Frizzi developed an underground following. Frizzi's scores for City of the Living Dead (aka Paura nella città dei morti viventi), The Beyond (aka ...E tu vivrai nel terrore! L'aldilà), Manhattan Baby, and many other made him a cult hero among horror fans. In 2003, Quentin Tarantino paid homage to Frizzi's work for Fulci, including an excerpt from the score for 1977's The Psychic (aka Sette note in nero) in the soundtrack to Kill Bill, Vol. 1. Also in the 2000s, Death Waltz Recording Company, an independent label devoted to releasing horror film scores in high-quality editions, began issuing several of Frizzi's scores, raising his profile even higher among horror fans and collectors of musical esoterica.

His scores for the 2010 short film Beware of the Darkness and the 2013 feature House of Forbidden Secrets were among those issued by Beat Records Company in the 2010s, and in October 2015, Frizzi performed in the United States for the first time when the composer and an eight-piece ensemble staged five North American concerts focusing on Frizzi's work for Fulci. In 2018, his soundtrack for the horror-comedy Puppet Master: The Littlest Reich saw release via Lakeshore Records." - Mark Deming & Marcy Donelson, Rovi