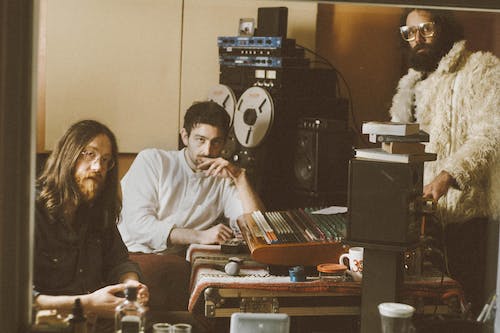 ‘Over the course of their twenty-one-year career, Okkervil River has released nine albums that have given frontman Will Sheff a reputation as one of the greatest working songwriters in the country. As Sheff and his shifting lineup of players have traveled the world many times over, they’ve made fans ranging from Lou Reed to Barack Obama and been praised by outlets from the New York Times to NPR to Pitchfork, who called Sheff “One of indie rock’s most ambitious thinkers.” 2019 will see Okkervil River’s two-decades-plus trek around the globe captured and anthologized in A Dream in the Dark, a 12-album live series that follows the group from their shaky and earnest beginnings to their sweat-soaked barnstorming rock club days, and from big festival sets into mellow acoustic improvisations. Along the way, A Dream in the Dark presents an alternate history of Okkervil River through the lens of their concerts instead of their albums, drawing from a deep well of recordings catalogued by Sheff and by fans throughout the years. Each installment of this sprawling digital series will come with detailed liner notes including essays and journal entries from the time, interviews with band-members past and present, profiles and collaborations with Okkervil River fans, and copious archival photographs.

To coincide with A Dream in the Dark, Okkervil River will be hitting the road this summer in a stripped-down trio lineup in a reprise of their popular “Rarities & Requests” touring format, where they’ll be playing stretched-out and often highly spontaneous requests-only shows in intimate listening-room venues.