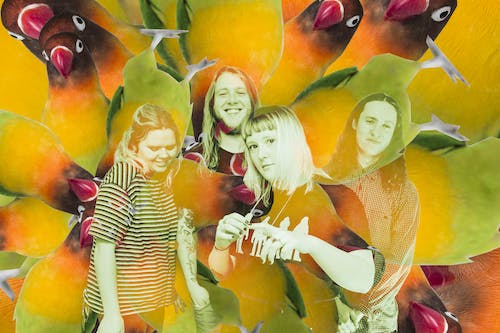 Formed around the chemistry between siblings and dual songwriters Jack and Lily Wolter, Until the Tide Creeps In is an album deepened by shared experience. Born in Devon and raised on the Isle of Man, the Wolters’ bonds were strengthened by separation when Jack moved away to study art at university at 19, when Lily was 13. As he puts it, wryly, “By the time I moved home Lily was not so much of an annoying younger sister anymore and had grown up and started playing in bands and writing songs. We soon became very close. I had written some songs, so we started a band called Your Gold Teeth. We toured a bit and then Lily left for Brighton to study songwriting. A couple of years later I moved down and we started Penelope Isles together.” For every sibling band forged in rivalry, many others mount an unassailable genetic argument for keeping the music in the family. The latter is assuredly the case with Penelope Isles, a quartet completed by Jack Sowton and Becky Redford.

Crisp and woozy, blissful and biting, Until the Tide Creeps In showcases the band’s expansive DIY mix of translucent dream-pop, fuzz-rock guitars and indie-psych flushes comes lovingly dipped in exquisite harmonies and lustrous melodies: a combination so intuitive, you’d think it was in their blood.