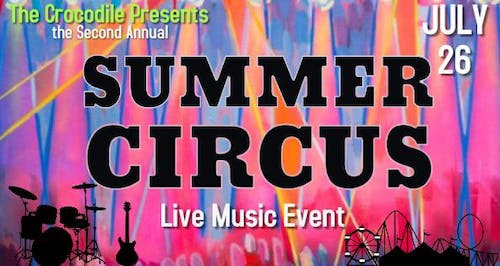 Come out to The Crocodile on Friday, July 26th for the Second Annual Summer Circus Live Music Event. Inside of the circus-decorated interior, you will find an exciting night of full of wonder, mystique, live music by some of Seattle’s best performers and awe inspiring circus entertainment in store for you. Unlike your average show, this spectacular and avant-garde event will showcase an impressive lineup of four local bands as well as live circus performances throughout the evening, including featured sets by an acrobatic duo, aerialists, and much more! This extraordinary event will surely be one not to miss and a night that will not be forgotten.

Razor Clam formed in January 2017. One of the primary goals was to increase racial & gender representation in the music scene & create a safe creative space for people in marginalized communities. Given the social spaces they occupy as individuals & a whole (POC, LGBTQIA+, people with disabilities, children of immigrants, etc.), Razor Clam aims to give back & represent those communities. Almost all of them have have worked with Rain City Rock Camp for Girls, they donated a percentage of our EP release sales to Gay City, and have played benefits for NW Immigrant Rights Project, B Strong & DVSAS. And while Razor Clam’s message & mission statement is something they always strive to uphold, they want it to be supported by the solidity of their music.

FRUIT JUICE: Fruit Juice is a band from Seattle, that has a strange tendency to invoke the music critics desire to invent supernatural origin stories. Likely something to do with the wide-eyed, alien-come-human perspective adopted in many of Jake McCaffray’s lyrics, accentuated by a backdrop of ear-catching pop, as defined by the likes of Kate Bush, of Montreal, and/or Brian Eno. This giddy energy is brought to life in the strange glam and theatricality of their live performances, leaving one to say “WTF JUST HAPPENED & I LOVE IT” (-Alaina Love). Fruit Juice has released a Full Length album and two EP’s on Swoon Records, and can’t wait to share what they’ve been working on lately.

HEATHER EDGLEY: Heather Edgley is a Baroque Pop singer-songwriter known for her contemporary style and ethereal voice that captivates audiences with the vulnerability of her tone and lyrics. Her band's dreamy and melancholy indie rock sound combines cinematic instrumentation, emotion-driven melodies, and energized dynamics with thoughtfully crafted lyricism emboldened with wit and vulnerability. Born and raised in the Pacific Northwest, Heather Edgley is a local Seattle Singer-Songwriter and pianist whose uninhibited, raw expression connects with her listeners on the deepest level, reminding us, even just for a moment, that we are not alone in our struggle, fight, or feelings. This five piece band includes lead vocalist and songwriter, Heather Edgley on piano, Chris Lovings on drums, Andrew Gemkow on bass, Marcelo Segura on guitar, and Dylan mines on erhu and lap steel. They recently released two singles, “Circus Lights” and “SKY” and are in the process of finishing their first EP.

ACTIONESSE: Actionesse began as a five-piece project in early 2015, in Bellingham, WA, and is currently located in Seattle, WA. Grounded in blistering punk roots, Actionesse blends twisting, zany brass with anxious, aggressive post-hardcore. The result is both a recorded and live experience that has been described as "a more nuanced level of rock brutality" (The Stranger, March 2018) and "one of the best live shows in Seattle right now..." (Seattle Music Insider, July 2018).

In the Fall of 2018, Actionesse took on a new form with addition of one of Seattle's top baritone saxophone players, Olivia Guinn (Butt Dial, Chaotic Noise Marching Corps, Filthy Femcorps). Barreling forth with rejuvenated vigor, 2019 has seen Actionesse in their boldest, rawest mode yet - with their third tour on the way, festival bookings, and the announcement of their debut full-length LP, 'The Deep, Bright Below', post-horncore stands to make its mark on the city of Seattle.