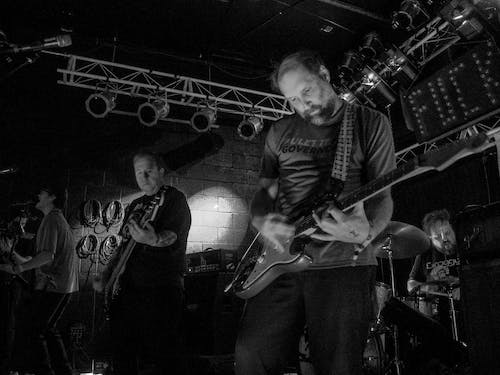 Treepeople was a punk band from Boise, Idaho, although it spent most of its time and was officially based in Seattle, Washington and started as the Boise, Idaho hardcore punk band State of Confusion (SOC). The band was formed in 1988 by Scott Schmaljohn (SOC, Stuntman, The Treatment, The Hand), Pat ‘Brown’ Schmaljohn (SOC, Hive), Wayne Rhino Flower (SOC, Violent Green, The Halo Benders, Faintly Macabre’), and Doug Martsch (Built to Spill, Halo Benders). Treepeople went through a few incarnations and finally disbanded in 1994, having released five albums and a handful of singles. These reunion shows will feature all living original members and Troy Wright (Ipper, Troyject, Hand of Doom, Sandusky Furs, Magnetics, Psychic Knot, Dunce Cap, USA {United States of Apathy}) on bass, replacing Pat who passed away in 1999 (RIP). The band is reuniting in 2018-19 for a handful of shows.