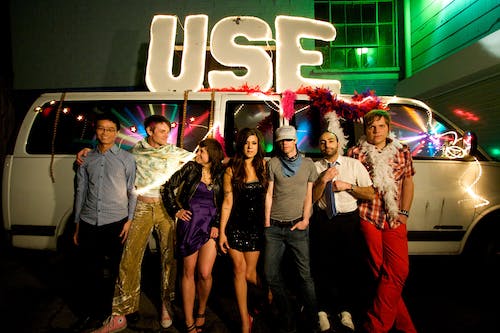 iCal
Google
with Aqueduct and 52 Kings

Beloved Pacific Northwest outfit United State of Electronica aka U.S.E is reuniting for its first show in exactly 10 years, to be held on New Year’s Eve 2019 at the Sunset Tavern in Seattle, Washington. The band will perform fan favorites from the group’s two acclaimed releases, U.S.E and LOVEWORLD, in addition to previewing new material. The show features support from Aqueduct and 52Kings.

SPIN said of the group, “U.S.E eschew irony, but gleefully grab Junior Senior’s songcraft, Daft Punk’s sonics, and the B-52’s moxie.” And Pitchfork offered this of its self-titled debut, “Each track is stuffed with simple and catchy vocal and guitar melodies set against tight, no-frills rhythm sections and a Basement Jaxx-worthy sonic overload in between.”